skip to main | skip to sidebar

Bundaleer and Booyoolie....tracing the steps of Edward, Hannah and Elizabeth 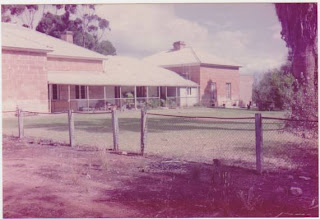 At some stage Edward Atkins moved from the Hutt River and lived at Bundaleer. Bundaleer is not a town or village as people will understand today, but an area covered by planted trees.  Many people lived scattered across the whole area. It could also be the case, and, at this stage, it is only speculation, that Edward Atkins may have been employed on the Bundaleer Run.

A “Run” is another name used in the 1800s for sheep or cattle station. In 1840 John Bristow Hughes arrived in South Australia with sheep which he got from Tasmania and established the Bundaleer Sheep Station.[1][1] Any sheep station would have needed a large workforce to maintain the station and for the daily operations of the station. In 1843 Bristow and Herbert Hughes, the brother of John Hughes, settled along the Rocky River with sheep and in 1846 established the Rocky River Run, known today, as “Booyoolee Station.”[2][2] The Hughes family were thus one of the main employers of people in the area and thus Edward Atkins may have worked for them.
It is believed that Hannah Atkins nee McLeod may have died sometime between 1854 and 1857. She may have died after Emily Atkins was born in 1854 and certainly, before Edward Atkins remarried Elizabeth Lewis nee Mashford in 1857. There is very little information on Hannah Atkins nee McLeod. In many ways the life of Hannah Atkins nee McLeod is a mystery. Few records can be found concerning her life.  There are no church records of her burial or a government death certificate. She may be buried at Bundaleer Cemetery, or on a family plot, but there are no records.

However, there are no records to be found. Furthermore, there are no private family burial plots or cemeteries located on the grounds of Booyoolie Station.[3][3] As a result, without further records Hannah Atkins nee McLeod will remain a somewhat mystery person.

The last reference of Edward Atkins living at Bundaleer was March 1854 when Emily Puddy nee Atkins was born. The next reference to him was 1857 when he was living at the time of his marriage. Therefore he moved from Bundaleer to Rocky River between 1854-1857. However what is Rocky River and why did he moved and did he move with Hannah?

He may have decided to move when Hannah McLeod died. If this was the case, he may have moved at any time after 1854 which is the last record to be found of Edward Atkins living at Bundaleer and before 1857 when he was living at Rocky River at the time of his marriage to Elizabeth Lewis nee Mashford.

Furthermore, in 1854 John B. Hughes sold Bundaleer Station.[4][4] It could have been the case that with the station sold, Edward Atkins decided to move on and work on Booyoolee Station owned by Herbert Hughes. Or with the station sold, Edward Atkins may have been forced to move by the new owners, for whatever reason, if he lived on the grounds of Bundaleer Station.

The marriage certificate of Edward Atkins and Elizabeth Lewis states that their place of residence at the time of marriage was “Rocky River.” Rocky River is not a town or village, but just a river that flows through the mid north of South Australia. Rocky River is named because of its’ rocky bed. It was named by E.J. Eyre when he discovered it in 1839.[5][5] It runs through or is close to the towns of Wirrabara, Laura and Gladstone, and is near to Charlton Mine. However, it does flow through Booyoolee Station and it is one of the station’s main water supply. So where exactly did both people live when they got married? If Elizabeth Mashford worked on Booyoolee Station then more than likely she lived on the station itself especially if she was a maid or servant. The author cannot prove it with evidence, but she may have been a maid to help the wife of Mr Herbert Hughes called Laura Hughes of whom the town of Laura was named after.[6][6] In 1855 she gave birth to a son:- “ On the 6th instant, at Boeulee, Rocky River, the lady of Herbert Bristow Hughes, Esq, of a son.”[7][7]  She gave birth to another son in the following year: - “On the 4th ultimo, at Beauewelee, Rocky River, the wife of Herbert Bristow Hughes, Esq, of a son.”[8][8]
Booyoolee Station had accommodation for its workers so there is no reason why she did not live on the station. So why did their marriage certificate show the place of residence as Rocky River instead of Booyoolee Station? 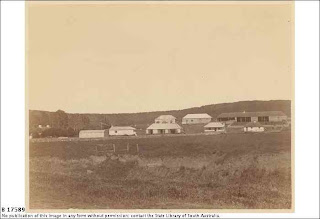 It shows that there was not a consistent spelling of the station’s name. It was also referred to as Hughes Run on the Rocky River.[9][9] The workers living on the station may have just referred to the station as “Rocky River” as their place of residence due to the inconsistency of the spelling of the name “Booyoolie.” Furthermore, when you consider that working class society in the 1800s had little education it would have been easier for them to spell their place of residence as “Rocky River” instead of the inconsistency of the spelling of the word “Booyoolie.” Thus Rocky River as a geographical location was then also reflected on governmental documents such as birth, marriages and death certificates even though there was no such town, village or settlement called Rocky River. As a result, I believe that both Elizabeth Lewis and Edward Atkins lived and worked on the station when they met.

I wrote a letter to the present owners of Booyoolie Station requesting clarification on the word “Rocky River.” The reply was that the area where the Hughes brother started to graze their stock was called the Rocky River Run. The name Booyoolie refers to a site where the Rocky River bends at Gladstone. Furthermore, the Rocky River Run had what are called outstations called Cookerpoo, Gnangwa, Caltowie, Pine Creek and Manatoo. All of these sites were included in the name of the Rocky River Run. It was not until about 1873 when the name Booyoolee Station gained importance.[10][10] The first station was established at Coocerpoo which is between present day Gladstone and Georgetown. A year later the main station house moved to Gnagwea near present day Laura before it moved to its present site now called Booyoolie Station outside the town of Gladstone.[11][11]

As a result, did Edward Atkins lived and worked on Booyoolie Station by the time he married Elizabeth Lewis nee Mashford. Whether he did live and work on Booyoolie Station where his children lived from his first marriage remains a problematical question. It also raises the question if Elizabeth Lewis nee Mashford lived and worked on the station, where did her children live?

At some stage after they were married in 1857, Elizabeth and Edward Atkins moved from “Rocky River” or Booyoolee Station to, or near, Wirrabara. Some conjecture is needed to work out why they moved and to fill in the gaps between what is known. At this stage it is known that Elizabeth Lewis nee Mashford moved from Adelaide to Booyoolee Station in 1856 where she met Edward Atkins who also may have lived on the station.

Close to the town of Wirrabara are the Charlton Mine and the Wirrabara Sheep Run which was also known as the Charlton Sheep Run. The Wirrabara Sheep Run was owned by the White Family. The brothers Samuel and Fredrick White took up the Charlton Run in the 1840s.[13][13] In 1854 Herbert Hughes married the White brother’s sister Laura White[14][14] and hence the two sheep stations at Wirrabara and Booyoolee were connected by marriage. Any move of location normally had to do with employment reasons. On both the marriage certificates of Hannah McLeod and Elizabeth Lewis (nee Mashford) Edward Atkins’ occupation was listed as a Blacksmith.[15][15] A Blacksmith would be needed in the area of Wirrabara for at least three reasons.

       The First; Wirrabara Forest was previously know as White Forest and the area was exploited for its wood for the copper mines located at Charlton and Burra.[16][16]  A Blacksmith would have been needed for the making and repairing of tools for the workmen.
       Secondly, a Blacksmith would be needed for the operations of Charlton Mine.
       And thirdly. If the Wirrabara Sheep Station needed workmen, then it would have been an easy matter of hiring workers from Booyoolee Station. Especially if the two stations were linked by marriage. The fact that Edward Atkins listed his occupation as a shepherd on his son’s birth certificate[17][17] indicates that Edward Atkins may have moved from Booyoolee Station to work on the Wirrabara sheep station and took his new wife with him. Furthermore, it was the custom or practice that when a woman married it was expected that she would stop working to look after her husband. It may be the case that if Elizabeth Atkins, Lewis nee Mashford was a maid working in the main homestead at Booyoolee Station, it would have been expected that she relinquish her position once she was married. There may not have been any accommodation for married women on Booyoolee Station and hence she had to move. If this was the case then Edward Atkins may have decided to move to the area of Wirrabara and took his large family with him.